Wojtek (1942–1963; Polish pronunciation: [ˈvɔjtɛk]; in English, sometimes spelt Voytek and pronounced as such) was a Syrian brown bear (Ursus arctos syriacus) bought, as a young cub, at a railway station in Hamadan, Iran, by Polish II Corps soldiers who had been evacuated from the Soviet Union. In order to provide for his rations and transportation, he was eventually enlisted officially as a soldier with the rank of private and was subsequently promoted to corporal.[1]

He accompanied the bulk of the II Corps to Italy, serving with the 22nd Artillery Supply Company. During the Battle of Monte Cassino, in Italy in 1944, Wojtek helped move crates of ammunition and became a celebrity with visiting Allied generals and statesmen. After the war, mustered out of the Polish Army, he was billeted and lived out the rest of his life at the Edinburgh Zoo in Scotland.

In the spring of 1942, the newly formed Anders’ Army left the Soviet Union for Iran, accompanied by thousands of Polish civilians who had been deported to the Soviet Union following the 1939 Soviet invasion of eastern Poland. At a railroad station in Hamadan, Iran, on 8 April 1942, Polish soldiers encountered a young Iranian boy who had found a bear cub whose mother had been shot by hunters. One of the civilian refugees in their midst, eighteen-year-old Irena (Inka) Bokiewicz, the great-niece of General Bolesław Wieniawa-Długoszowski, was very taken with the cub. She prompted Lieutenant Anatol Tarnowiecki to buy the young bear, which spent the next three months in a Polish refugee camp established near Tehran, principally under Irena’s care.[2] In August, the bear was donated to the 2nd Transport Company, which later became the 22nd Artillery Supply Company, and he was named Wojtek by the soldiers. The name Wojtek is the nickname, diminutive form, or hypocorism of “Wojciech” (Happy Warrior), an old Slavic name still common in Poland.[3] 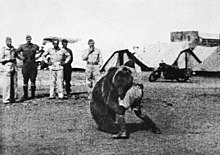 Wojtek play-wrestling with a Polish soldier

Wojtek initially had problems swallowing and was fed condensed milk from an old vodka bottle. He was subsequently given fruit, marmalade, honey, and syrup, and was often rewarded with beer, which became his favourite drink. He later also enjoyed smoking (or eating) cigarettes, as well as drinking coffee in the mornings. He also would sleep with the other soldiers if they were ever cold during the night.[4][5] He enjoyed wrestling with the soldiers and was taught to salute when greeted. He became an attraction for soldiers and civilians alike, and soon became an unofficial mascot to all the units stationed nearby. With the 22nd Company, he moved to Iraq, and then through Syria, Palestine, and Egypt.[6][deprecated source] Wojtek copied the other soldiers, drinking beer, smoking and even marching alongside them on his hind legs because he saw them do so. Wojtek had his own caregiver, assigned to look after him. The cub grew up while on the campaign, and by the time of the Battle of Monte Cassino he weighed 200 pounds (14 st; 91 kg).[7]

From Egypt, the Polish II Corps was reassigned to fight alongside the British Eighth Army in the Italian campaign. Regulations for the British transport ship which was to carry them to Italy forbade mascots and pet animals. To get around this restriction, Wojtek was officially drafted into the Polish Army as a private and listed among the soldiers of the 22nd Artillery Supply Company. Henryk Zacharewicz and Dymitr Szawlugo were assigned as his caretakers. 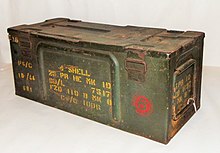 As an enlisted soldier with his own paybook, rank, and serial number, he lived with the other men in tents or in a special wooden crate, which was transported by truck. During the Battle of Monte Cassino, Wojtek helped his unit to convey ammunition by carrying 100-pound (45 kg) crates of 25-pound artillery shells, never dropping any of them. However, this story is of big controversy due to some people saying it was false, while a British soldier recalls seeing a bear carrying crates of ammo.[9] The bear mimicked the soldiers: when he saw the men lifting crates, he copied them. Wojtek carried boxes that normally required 4 men, which he would stack onto a truck or other ammunition boxes.[10] This service at Monte Cassino earned him a promotion to the rank of corporal. In recognition of Wojtek’s popularity, a depiction of a bear carrying an artillery shell was adopted as the official emblem of the 22nd Company.[6][7]

After the end of World War II in 1945, Wojtek was transported to Berwickshire, Scotland, with the rest of the 22nd Company. They were stationed at Winfield Airfield on Sunwick Farm, near the village of Hutton, Scottish Borders. Wojtek soon became popular among local civilians and the press, and the Polish-Scottish Association made him an honorary member.

Following demobilization on 15 November 1947, Wojtek was given to Edinburgh Zoo, where he spent the rest of his life, often visited by journalists and former Polish soldiers, some of whom tossed cigarettes for him to eat, as he did during his time in the army.[11] Media attention contributed to Wojtek’s popularity. He was a frequent guest on BBC television’s Blue Peter programme for children.[12]

Grandpa Zalewski and his adventures

Grandpa Zalewski was born in 1918 in the village of Serock near Koronowo in Northern Poland, which at that time was near the Polish-Prus (German) border.
When the 2nd world war broke out and Poland was invaded Stan has been forced to join Wehrmacht and shipped out to France.
Being a Polish soldier in German ranks must have been an unbearable burden and Stan decided to desert German ranks and try to get back to Poland and fight the German and Russian invasions at that time. Bear in mind Poland was carved up between Russia and Germany long before war broke out * Ribbentrop Molotov pact)

Unfortunately, shortly after his magnificent escape pops got captured by French “la resistance” and held captive under suspicion of spying for the Nazis. Only after magical work “kurwa” sounded in an old barn in the middle of nowhere in Brittany French realised his Polish not German and stopped interrogating him.

After a few days of constant hiding in the aforementioned barn in a stack of hay, Stan slowly, day by day moved south and once he reached Marseilles he bordered a cargo vessel and got to Egypt where he joined the Andres army mentioned before.

His rest was quickly over as the Polish army was sent to Italy.
During one of the bloodiest battles of the Italian campaign (Monte Casino)
Stan has septet on a land mine and lost a few toes and was removed from the battlefield.

Once the campaign was over. Polish army which suffered the most during this bloody ordain was sent to Scotland of all the places to recover and prepare for the future invasion of Nordic Europe which never came to bee.

Grandpa Zalewski after recovery was stationed at one of the farms in East Lothian and there he started keeping bees in his free time.

He chose to go back home, and what price he had to pay.

When he came back to Poland in 1948 was immediately interrogated by the communistic secret police and tossed in prison for being in the wrong Polish army.

Even though Stanislav Zalewski was a master builder and amazing engineer he never could progress in his career in Poland due to the wartime events.

Grandpa Zalewski passed away in 2005 at age 87.
Shortly before that, I had a chance to speak with him about moving to the UK to follow my dream of being a chef.
Here is what he told me and I swear it is the truth.
“Don’t go to London it is awful. Go to Scotland. Weather is shite but people are honest and they know how to drink.”

As always the man was right.

Thank you for reading. It is a very unpleasant history to talk about, but I strongly believe that heroes like Stan, who sacrificed so much for other nations should never bee forgotten.