They all have superfood unique properties!

Garlic and Linden honey are powerful natural antibiotic both having anti-inflammatory and antibacterial properties,  while onion is rich in vitamin C and is as much antibacterial too. When combined together in a mixture, it becomes very powerful cold preventing medecine! 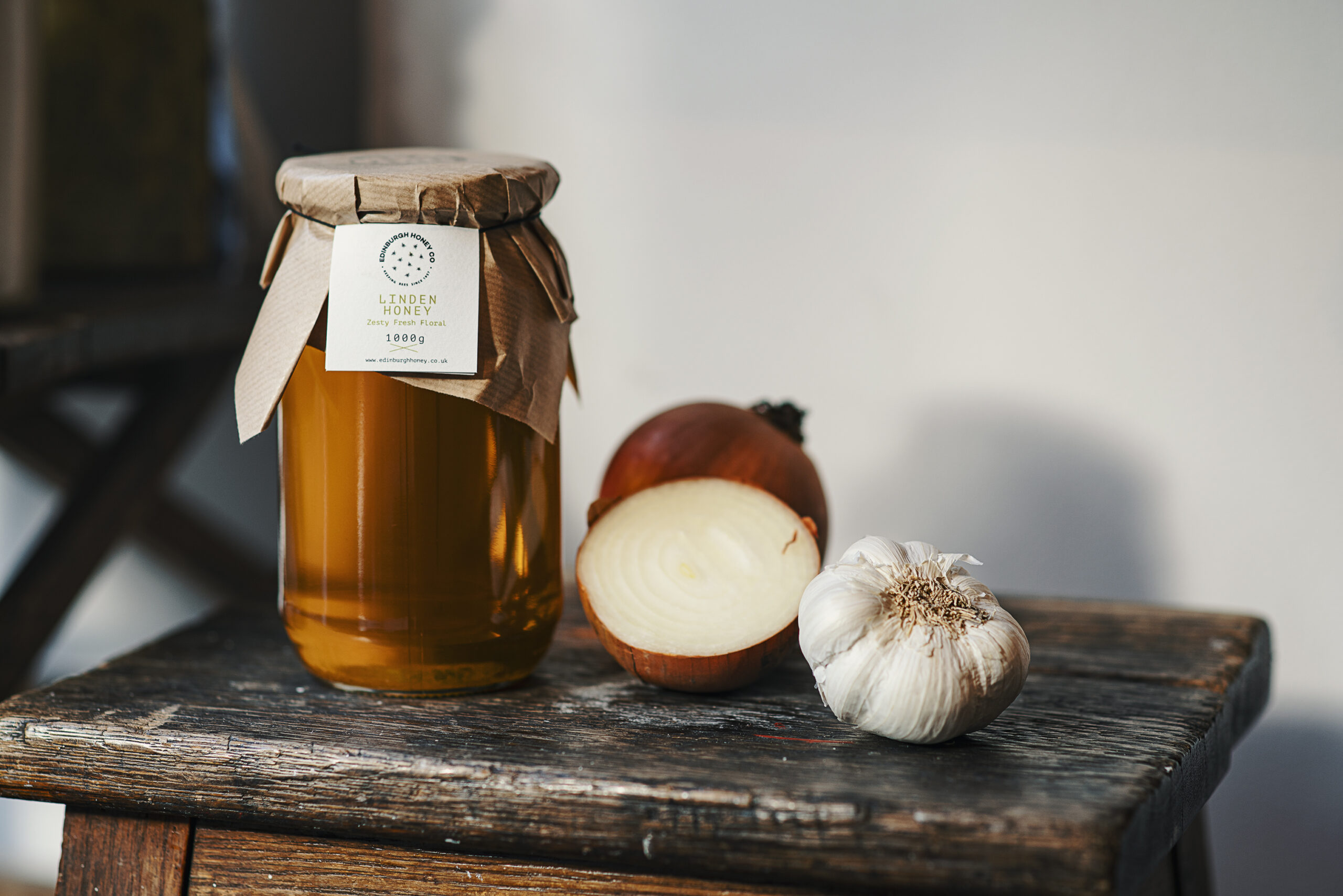 Onion is a vegetable whose properties are known for centuries. In the past onions have been the most valuable medicine to combat scurvy, that is, the acute lack of vitamin C. It was taken on long voyages by sailors, merchants and whalers.

In folk medicine, onion decoction was recommended for rheumatic diseases and honey onion syrup (yay! our recipe down below!) was a cold/flu symptoms relief.

People who regularly eat onions and garlic have a lower risk of developing certain cancers than people who do not like these vegetables, say scientists from Italy and Switzerland.  Eating a minimum seven portions of onions a week reduces the likelihood of colorectal cancer by more than 50 percent. (compared to those who refuse to eat onion and garlic). 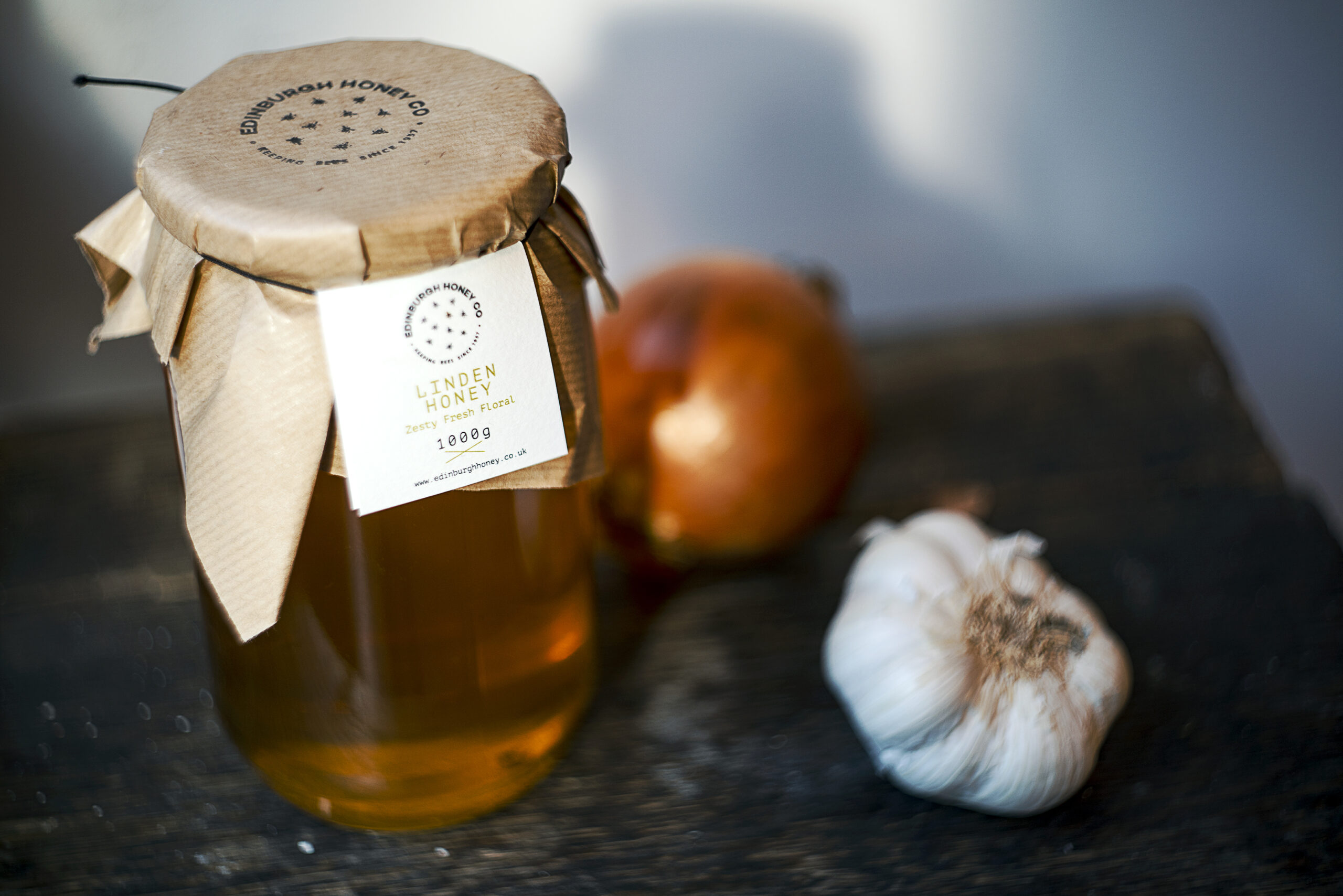 From the rich list of valuable properties of onions, it is also worth mentioning its blood thinning and anti-clotting properties and thanks to its high potassium content (146 mg / 100 g), onion may contribute to lowering blood pressure.

On the other hand just one little garlic clove contains the entire pharmacy!

Garlic uses were well documented by many major civilizations, including the Egyptians, Babylonians, Greeks, Romans and Chinese.

To get the full benefit of garlic, it’s best to eat up to 5 g of raw garlic, i.e. two or three cloves a day. By consuming garlic daily, you protect your body against Helicobacter pylori, salmonella, streptococci and staphylococci, as well as against pathogens responsible for tuberculosis, dysentery, candidiasis and herpes.

The advantage of garlic over artificial antibiotics is that it kills the harmful bacteria, while pharmaceutical antibiotics get rid of both harmful and beneficial microorganisms, thus disturbing our microflora.

Linden honey is considered by many experts to be the best-tasting honey when very fresh it has a greenish colour, but after a time it becomes clear to amber with a yellow tone. The aroma is described as woody, pharmacy and fresh, also described as mint, balsamic, menthol, and camphor.

This honey is quite difficult to produce  as larger clusters of the linden trees are very hard to find.

Some who notice this tree during the most humid part of the summer call it the “bee tree” because it produces so much nectar that bees are extremely drawn to it. There’s so much nectar – as much as forty pounds per individual tree – that honey bees can potentially gather a full ounce from each flower.

Linden honey has valuable healing properties, best known for its diaphoretic, expectorant and strengthening effects. Due to the diversity of its ingredients, it is widely used both in nutrition and in medicine. Linden honey is considered to be the best remedy against colds, flu and illnesses with high fever. The high content of essential oils helps to destroys microorganisms present on the mucous membranes of the respiratory tract so it is recommended as support for fighting flu, colds and other respiratory infections. It can also support the treatment of pneumonia and bronchitis, because it helps to reduce inflammation. It soothes coughing attacks.

So how to make the linden honey remedy syrup? You won’t belive how easy it is!

All you need is Linden honey,  couple of onions, few garlic cloves and patience – ah and the empty jar!

Dice the onions finely and crushed around 3-4 garlic cloves, then place them both inside the jar – then mix it thoroughly – when ready add around 300 ml of Linden honey just as much to cover the mixture and stir it.

After mixing all of the ingredients well, cover the jar with a cotton cloth and leave overnight to allow onion and garlic to produce their juices which are enhancing our mixture. The next day it will be ready – the most powerful is the syrup itself so feel free to strain it however we believe it is good to eat it all.